The new ‘Hennecke Production System’ (HPS) was launched in mid-2020 along with the associated plans for reorganizing metering machine production at the company’s Sankt Augustin site in Germany. Step-by-step, the HPS has been introduced at the other Hennecke GROUP sites in Verano Brianza (Italy), Pittsburgh (USA) and Jiaxing (China).

The company is investing several million euros in this gradual organizational transformation across the world. Not only will it increase production efficiency, but also offer many benefits to Hennecke’s customers as the optimization measures bring a noticeably faster throughput. “With our stand-alone metering machines, for example, our customers are already profiting from shorter lead times and a lower base price for standard configurations. Something which is definitely not a matter of course these days,” says Sabine Rudolf, Global Director for the Hennecke Business System.

Thomas Wildt, Hennecke GROUP CEO, explains the significance of the new production system: “By combining practical methods and design principles with maximum efficiency, the new HPS aims to achieve sustained success for the Hennecke GROUP.” Inspired by Toyota, the HPS is a modernized production system that has been fully tailored to Hennecke. The production methodology is based on eliminating waste, whilst at the same time representing the company culture of the future for the international corporation. The HPS content is tailored to the specific needs and requirements of the respective Hennecke production site. Here all the sites are faced with a so-called ‘brownfield’ of existing production areas (the opposite to a ‘greenfield’, where a factory can be created on open countryside without restrictions). This means that the current design of the production areas limits productivity, and especially expansion. The set of measures also includes a realignment of the global Hennecke organization. “Here our company is unbundling its organizational complexity: what was previously designed and built at several sites in parallel is now being produced at only one of the four centers of excellence,” explains Sabine Rudolf. 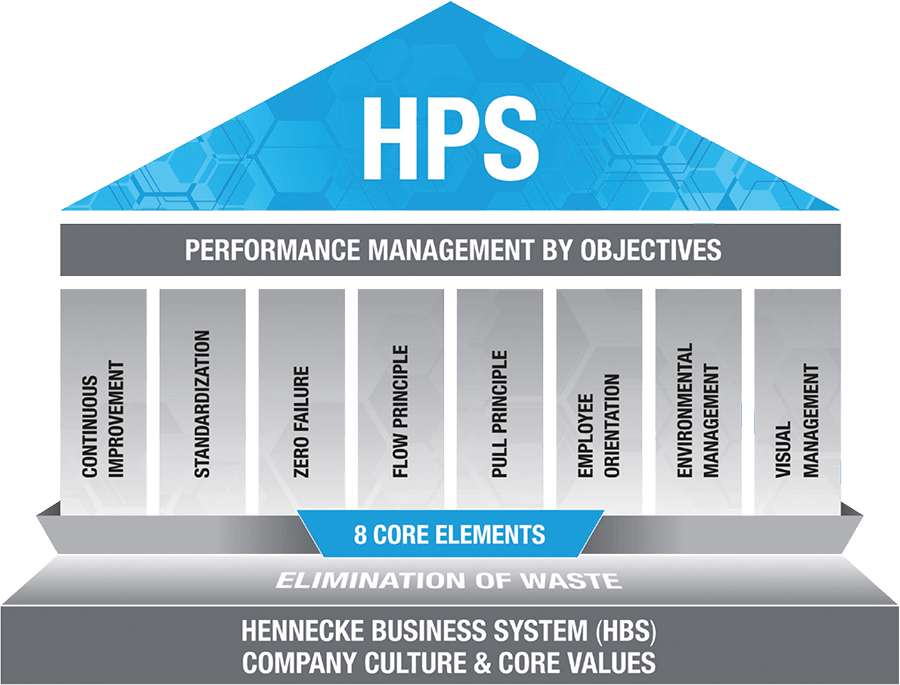 One of the focal points of the HPS is to connect the different operational areas, allowing for a synchronized, waste-free production that is aligned with customer demand. Here the objectives are to reduce stocks and wait times, maximize quality and adherence to delivery dates, and use the assembly space to add value. Optimizing the production layout plays a mayor role here. Removing the partition walls and distinctly separating the areas for assembly and material supply creates greater adaptability for assembling freely configured and flexibly designed machines and plants with largely standardized products. Separate areas are also dedicated to pre-assembly and customization.

Development, planning and manufacture of all the high and low-pressure PUR machines and available mixhead systems have been consolidated at the headquarters in Sankt Augustin. The reconstruction has been successfully realized; the space-saving and largely automated storage towers have recently been approved for start-up, and a new logistics center has just been completed. At the Verano Brianza site in Italy, home to Hennecke-OMS with its market-leading portfolio of sandwich panel production lines, the measures are also close to completion. Since the official start in December 2021, every square centimeter has been analyzed and adapted to meet the new requirements. The work has focused on maximizing production space and capitalizing on the benefits of the fourth industrial revolution (Industry 4.0), as well as creating a modern working environment for the staff. The reconstruction began in March 2022 and has been carried out without causing any disruption to the ongoing production. At the same time, great efforts have been devoted to improving work processes and reorganizing the different areas. The transition is almost complete. Finally, an area measuring approximately 900m² in size will be ready for creating long-term customer value. Works are now underway to put the storage towers into operation – making the logistics processes more efficient – and to install a new energy-saving heating system. All the modernization work and structural changes have been carried out under close consideration of Hennecke’s ecological footprint and the company-wide ESG objectives.

“After the success of the HPS roll-out in Germany we didn’t want to wait,” reports Sabine Rudolf. Subsequently, the launch date for North America was set for October 2021. The Pittsburgh site is responsible for tank farm technologies for the entire system business of the Hennecke GROUP. The production areas have been analyzed in detail and plans drawn up for the new layout: The value-adding area will be enlarged by around 340 square meters, separate areas will be created for logistics and production, and the transport spaces will be reduced to the minimum required. New tools and equipment will be procured to make work at the site more efficient and ergonomic, whilst reducing the risk of hazards and injury. All these measures are due to be completed next year.

The site in China has suffered from delays due to the pandemic. Shanghai and Jiaxing are home to the global competence center for the construction of plant dry parts for slabstock foam, molded foam and the technical insulation lines. Travel restrictions have meant that so far the initial steps could only be made digitally. As part of the standardization strategy, design guidelines have already been introduced, as well as a variety of assembly and testing instructions to ensure consistent quality. The layout will be redesigned in the same way as at the other sites, conforming with the HPS principles. Besides order and cleanliness – “a place for everything and everything in its place”, as the saying goes – the focus here is also on general structuring, maximizing and separating the value-adding areas from the transport areas. Other ongoing projects concern resource efficiency and environmental protection, as well as improving employee-centered management. Implementing the standardized project planning guidelines for all new incoming orders and making detailed improvements to design plans are further priorities. Sabine Rudolf is delighted with the progress: “We have finished implementing the measures at our German site for the time being and can now move on to the next level, Italy is on the verge of completion, and USA and China are also on their way. The Hennecke GROUP is set up extremely well for the future!”

The production area at the Pittsburg site will be extended by 340 square meters through the new layout. 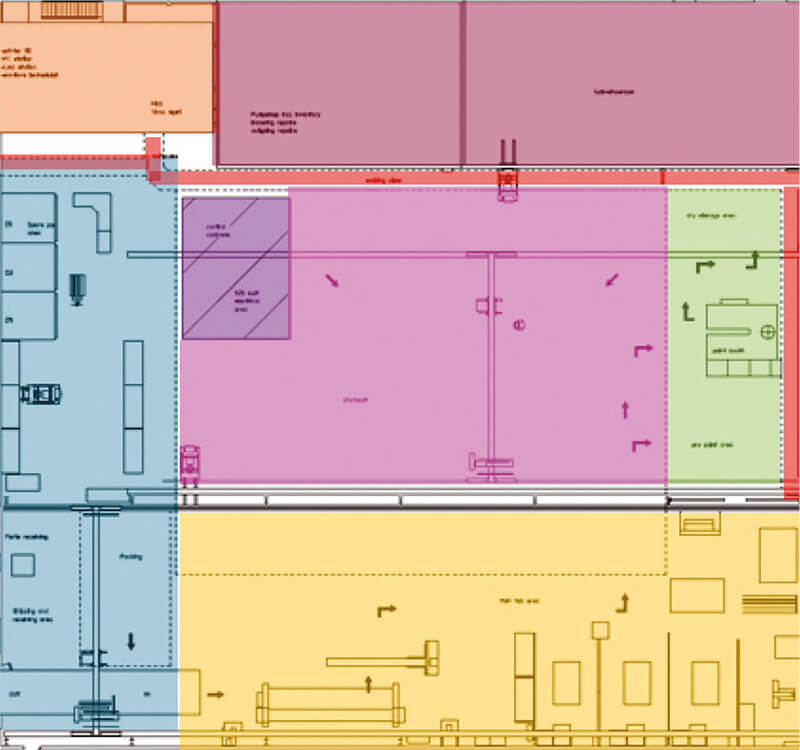 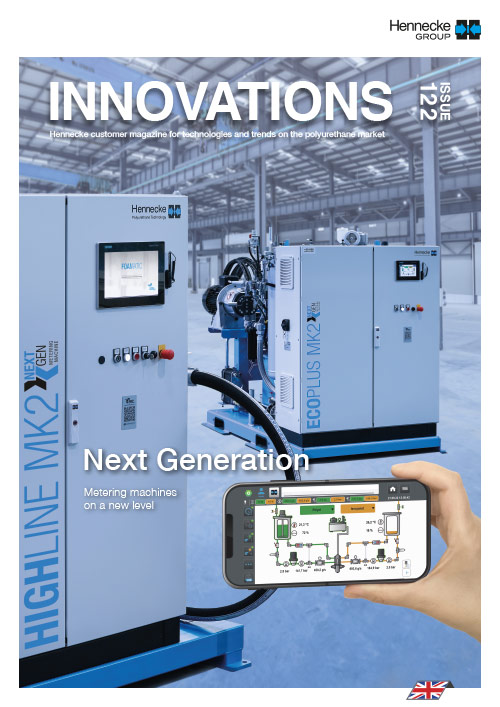