From concept to serial part in record time

Polyurethane specialist Hennecke is well-known for providing innovative systems and technologies that are geared to meeting customer requirements in all conceivable applications. This would not be possible without intensive and continuous research and development at the in-house TECHCENTER. This example from Nanostone Water GmbH demonstrates how a ceramic industrial filter with a polyurea coating was developed for serial production at the TECHCENTER in close cooperation with the customer.

Nanostone contacted Hennecke in mid-2016 with an unusual request. The front of a ceramic industrial filter was to be sealed with polyurethane or polyurea. The challenge of this project was to avoid closing up the many nano-coated channels and to only wet the unprotected web structure between them, so that they may longer withstand the abrasive or chemical influences on the medium to be filtered and thus effectively increase the filter service life. Hennecke rose to the challenge and together with Nanostone simulated possible spraying distances, outputs and robot traveling speeds. Assuming that a certain material surface tension could provide a solution to the problem, tests were planned at the TECHCENTER to ascertain if the theory applied in practice. This involved using a MICROLINE - a high-pressure metering machine for the precise metering of the tiniest outputs - together with a robot-controlled MN6 spray mixhead. The first shots looked very promising and the desired physical effects were confirmed.

It was even possible to process two different systems and thus determine their advantages and disadvantages. During the testing period, the optimal process parameters were identified and prototypes were produced for further testing and a field trial.

The results exceeded expectations and so Nanostone Water GmbH decided to invest in a production plant. In under just six months, Hennecke had manufactured the plant, assembled it at Nanostone and integrated it into the existing synchronized serial production. The process-related knowledge gained from the preliminary testing could be passed on to the plant operators at Nanostone. This is an impressive example of the opportunities provided by the TECHCENTER at Hennecke. In less than two years' development time, an idea and initial enquiry have been transformed into a production plant for optimized serial parts. 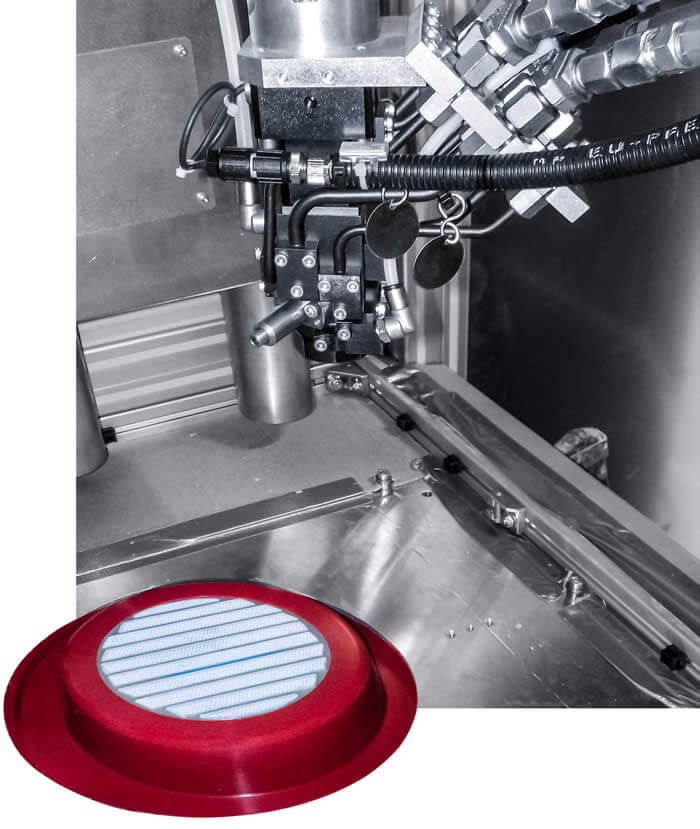 Automated polyurea spray application for coating the filter front side

At its headquarters in Sankt Augustin, Hennecke runs a fully equipped 1000 m² technology center. Here you can find a variety of different machines operated by application engineers, making it possible for interested customers to develop their own new parts or to redefine existing parts. Not only can prototypes be made for pilot production, and initial tests carried out on new products, but also existing products can be improved and reproduced using other production processes. Process technology engineers are actively involved in the development process and if necessary can also provide support services such as simulations or calculations. The machine portfolio currently includes the following systems:

Due to the growth in new application areas and more extensive processes, existing machines are constantly being designed, tested and further developed for serial production at the TECHCENTER. 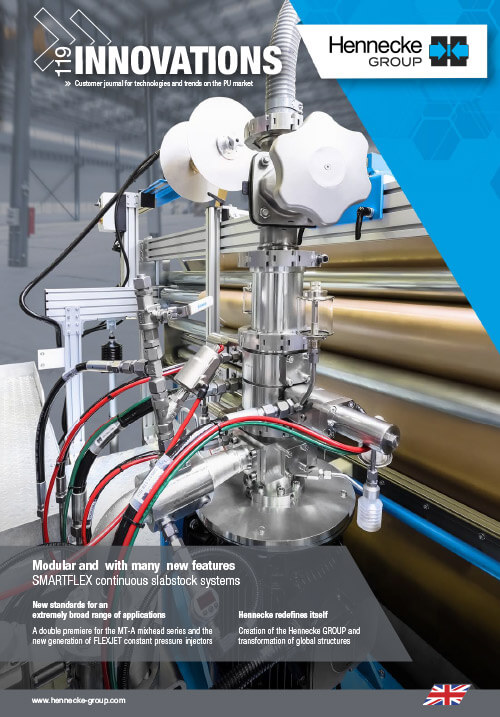